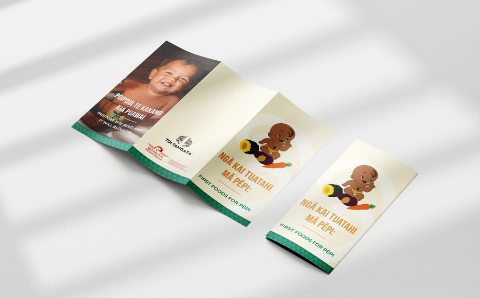 Posted at 16:20h in News by admin-toitangata

A recent study involved interviews with Māori parents to understand their experiences with introducing first foods to pēpi and explore the values and practices of Māori whānau with infants during this phase.

Māori infants are differentially impacted by nutrition and health inequities that may begin in early childhood and continue to impact health outcomes in later years. Therefore, health and nutrition interventions and services need to consider the values, preferences, and cultural perspectives of Māori whānau in order to ensure more equitable outcomes for Māori pēpi

A thematic analysis of the interviews identified two theories for understanding infant complementary feeding within Māori whānau: firstly, that infant feeding is a natural and instinctive process for many Māori parents, guided by responsive feeding practices; and that complementary feeding is being actively decolonised across generations. These theories indicate that Te Ao Māori centred living, grounded in matauranga Māori is integral to infant feeding values and practices within Māori whānau.

Whānau in this study practiced responsive infant feeding by following their pēpi and their cues rather than going with a strict timeline. Many whānau reported feeling safer going with their instincts and following their babies cues than following information given to them by mainstream organisations.

Infant feeding was also seen to be involved in the process of decolonisation among the whānau interviewed in this study. This was noted through generational differences in practices and priorities. For example, the younger participants had a stronger value on breastfeeding over bottle feeding. These whānau also discussed trying to feed their pēpi kai that their tupuna ate, kai from the whenua that connected them to the Atua.

There were also specific concerns expressed by whānau which highlighted the need for revisions to the infant feeding guidelines. Since this study was conducted, these guidelines have been updated and now include information regarding responsive feeding which is seen to be more relevant for Māori whānau.

There were also concerns among whānau that the nutrition resources they received around infant nutrition were not useful as they did not include information specific to their whānau needs and their cultural differences as Māori. In response to these concerns, the lead researcher for this project has worked with a team of Māori & Pākehā researchers and health professionals to produce two resources that better capture the values, practices and needs Māori whānau when introducing kai to pēpi.

The first resource is intended to support whānau Māori in their journey of introducing kai to pēpi by providing key information that supports them in following pēpi and their cues.

The second resource is intended for healthcare professionals who provide information and support for Māori whānau in this area. This resource is designed to support health professionals to think critically about their practice, how they interact with whānau Māori, and the type of nutrition information they provide.

These resources were supported by Ngā Pae o te Māramatanga and Toi Tangata.

The nutrition resources can be found on our website here