30 Jun A practice in intergenerational vision

Posted at 00:23h in News by Haylee Koroi

Toi Tangata Kai Maori Kai Ora lead, Haylee Koroi, recently attended the Taiohī Taiohā wānanga in Motukaraka. Here she reflects on the value of long term thinking and encourages us to consider the ways in which we live in connection with the world around us.

Over the last few months we have been slowly sinking into the rhythms of Hokianga life. We head along to reo and tikanga classes at the marae on Thursdays; every now and then we walk past the kaumatua flats and see if anyone needs help with their gardens. To suit the colder winter weather, we’ve changed the vegetables growing in our pots to things like kale, bokchoy, coriander, lettuce and radishes. We have also sorted our compost with an import of composting worms after realising our soil was lacking a bit.

The most exciting part of the last few months however, was having the opportunity to share space with our good friend, amazing cook and well-known artist, Nikau Gabrielle Hindin. Nikau is an aute or Māori bark cloth maker, reviving the practice in Aotearoa. We’re (not so secretly) obsessed with our friend, so jumped at the opportunity to join her again in wānanga. Nikau, alongside the team at Toi Ngāpuhi, are investing in the next generation of Ngāpuhi artists. The wānanga took place in Motukaraka at Nikau’s marae, and is named Taiohī Taiohā, a wānanga which supports Ngāpuhi rangatahi to learn and grow in their art practices.

This time we returned to Nikau’s wānanga space with aute that we had beaten two years earlier in July 2020. We would soak our aute for a second time fermenting it so that the fibres would soften. With another beat, the aute would take on a papery fibre-like texture. I suspect that many people who know of Nikau will only have witnessed her artistry in its final form, in the fermented, twice beaten, earth-pigment painted and named pieces of aute. However, getting to sit with Nikau as she so diligently and intuitively peels, scrapes, flushes and beats the aute is truly a wonder to behold. Her work is, from my point of view, reflective of her deep commitment to process.

The gravity of this commitment to process for Nikau begins early on with the task of ensuring that aute (the paper mulberry plant) is an enduring resource here in Aotearoa, not only for her practice but for future practitioners. On the first day of wānanga we struggle to remove the outer bark and so we return some of the aute into a water bath to be hydrated further. Later that day Nikau explained that the process would not have been so difficult for our tīpuna because they would have grown aute specifically for the purposes of bark cloth making. The plants would have been sufficiently spaced, branches regularly trimmed, and the right soil conditions for growing maintained. By investing in aute so early on, the process of beating is made a lot easier.

Nikau’s intergenerational vision is a lesson for all of us. It reminds me of something that Ali Meders Knight, Mechoopda tribal member, traditional basket weaver and practitioner of Ecological Traditional Knowledge says in the podcast Cultivating place. She says, “to weave a beautiful basket requires good land management”. This was such an obvious but critical point. To beat aute within the span of a day, to weave a basket within a number of hours, to grow food within three months, all of that is great. But to do any of that well, and to do it for generations to come, requires intergenerational vision, a re-membering of the wider whakapapa which holds space for us.

Our departure from Hokitika and arrival in the beautiful far north has also had its challenges. In our return, we are faced so clearly with the reality that the intergenerational vision of kai we had imagined may not start where we had hoped. Instead, we are being called to consider the mauri of our tūākana, the Waipoua forest, which is suffering severely from Kauri dieback and the impacts of introduced pest and weed species. For now, we are looking at small ways that we can support. We are hoping to support efforts to reduce the pressure of pest species on native environments alongside kaitiaki like The Waipoua Trust. We are also committed to regenerating the soil in our own backyard, something we can do everyday through composting. This is not necessarily with the goal of growing food, but perhaps with the goal of restoring natives to this area. Generations from now, with all of our efforts combined, maybe food will be grown by our mokopuna where we have tended the soil. That’s the commitment to process and to intergenerational vision that we’re willing to make, just like Nikau, and just like those who have come before us.

We want to thank Toi Ngapuhi and in particular Bethany Matai Edmunds for allowing us to spend time alongside her and the beautiful rangatahi of Taiohi Taioha. And of course to our friend, Nikau, from whom we continue to learn so much, we love you, e hoa. 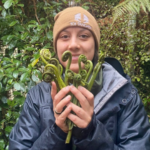 Haylee is the Kaiārahi Training and Nutrition Lead for Toi Tangata.