Posted at 14:34h in News by Renei Ngawati

Renei Ngawati (Ngāti Hine) shares her whakaaro on the Te Ara Whetū online conference and how the normalisation of te reo Māori me ōna tikanga in health settings is now being discussed more openly without coded descriptions of cultural safety.

During the recent Te Ara Whetu Māori Health Promotion hui held online and hosted by Te Hā Oranga, those in attendance were able to listen to experts not only in Māori health promotion but also in te reo Māori, whānau oranga and kaupapa Māori research. I think back to when I first started working in health research and remember listening to Dr Mihi Ratima, Dr Leonie Pihama, and Dr Linda Tuhiwai Smith and learning about what kaupapa Māori research and mātauranga Māori approaches were, and how it worked within and alongside tikanga Māori we had been raised living.  From the kōrero that took place, one of the things that stood out for me was the sense of progress made through the hard work of te reo Māori revitalisation and the normalisation of tikanga Māori in the health promotion world.

Dr Linda Tuhiwai Smith spoke on her reflections of a lifetime of work in the kohanga reo movement and the education sector while encouraging the integration of te reo Māori me ona tikanga into the sector. Dr Ruakere Hond encouraged us to start thinking about our own language plans when wanting to increase not only our own te reo Māori use within our whānau, but in the workplace as well. He also talked of the relationship of te reo Māori to whānau oranga in health promotion mahi. Those are experiences that many of us have had, and alludes to the need for the normalisation of te reo Māori to be integrated deeper than merely surface level. He made reference to Dr Mihi Ratima and her mahi in Māori health promotion determinants that have stood as a marker for those navigating how to articulate intrinsic knowledge of whanau oranga.  Dr Prof Mason Durie summarised a lifetime of work and future direction for whanau ora –  including the role of iwi boards in the makeup of the new health system.

The takeaway for me from all of those kōrero was the conversation about whanau oranga and the sense of stability in the expression.  I felt a sense of freedom in the expression and discussion of it, rather than a ‘trying to convince the audience in terms we may or not may not understand’. For example, we have been trained with expressions such as ‘cultural competency’ and ‘cultural engagement’  rather than whānaungatanga being used as a normal and universally understood kupu. The conversation is now loudly being had about whanau oranga being normal through normal use of te reo Māori me ōna tikanga that is not just restricted to home, kohanga, or to kura kaupapa Māori/rumaki education environments.

Normalised use of te reo Māori me ōna tikanga in health settings is being talked about and not clouded by descriptions of cultural safety anymore. The kōrero from Dr Mihi Ratima and Dr Linda Tuhiwai Smith that spoke of the right of tamariki to live their normal lives i roto i te reo Māori outside of kura and kohanga reo. This was affirming for the mahi that Toi Tangata is working towards in helping to normalise and remove whakamā that kaimahi may have when wanting – or needing – to kōrero Māori in varying degrees in the workplace.

I want to mihi to the kaimahi at Te Hā Oranga and all the kaitautoko that organised the Te Ara Whetū hui and congratulate them for providing a safe space for kōrero that is so normal to us. 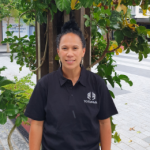 Renei comes from a health promotion and Māori development background as a former lecturer in Māori Health at AUT University. He uri ia no Ngāti Hine me Ngāti Porou.