Posted at 22:13h in Growing the Puna, Rangahau by Wanakia Heather-Kingi

I have just completed a 10 week internship with Toi Tangata where I have been researching the whakapapa, ingoa Māori, and purpose of the essential elements (pūmotu) to inform oranga kai, oranga tinana. It has been an interesting and enjoyable topic of research. Not only was I able to apply some of the learnings I gained through studying at university, but I was able to take it further through the application of whakapapa and mātauranga Māori.

When it came to researching, there was a limited amount of literature out there on the whakapapa of the pūmotu, though fortunately, through whanau connections I was able to interview a previous teacher of mine from high school (Whaea Ruihi Shortland), who had recently completed her PhD thesis on A Māori interpretation of the periodic table. This helped me immensely when it came to kōrero pūrākau and the whakapapa of certain elements.

I decided to focus on seven essential elements and four non-essential elements in my research. Firstly, I looked at the ingoa Māori of the elements which is something I hadn’t come across before. In respect to naming the elements that derive from Papatūānuku the prefix, ‘konu’ was used. This kupu is a contraction of the word konganuku and konganuku is a contraction of the phrase “ngā kongakonga o Papatūānuku” or the crumbs of Papatūānuku. For example, the element that we know as Sodium has the ingoa Māori of konutai. Konu is used as the prefix to represent an element that is derived from Papatūānuku and tai is used as a descriptive suffix that refers to sea salt. The prefix hau is used for elements that derive from Tawhirimatea and the prefix pu is used for solid elements. For example, the kupu Māori for Nitrogen is Hauota. The prefix hau is used to represent an element derived from Tawhirimatea and the suffix ota short for otaota (vegetation) is used as Nitrogen which is found in vegetation.

Next, I looked at the whakapapa of the elements. Most of the elements have a direct whakapapa to Papatūānuku as many minerals are found in her soil. Plants absorb the minerals from the soil through their roots, animals eat these plants to gain the minerals. We then eat the plants and animals to nourish ourselves with these essential minerals.

Some other elements had an interesting kōrero attached to them. For example, oxygen or hāora has whakapapa to Ranginui and Papatūānuku as well as Tānemahuta and Hineahuone. Sunlight is essential for the production of hāora, this was possible through the separation of Ranginui and Papatūānuku to bring in Te Ao Mārama, the world of light.  Hāora is stored within the realm of Tānemahuta and his descendants. His descendants produce oxygen through the process of photosynthesis.

Tānemahuta created the first female human figure, Hine-ahumai-i-te-one. She was formed from the earthly elements of Papatūānuku at Kurawaka. He breathed into her nostrils and she drew her first breath and let out a sneeze – Tihei Mauri Ora! Hine-ahu-one was alive and became the first ira tangata to be created and to take a breath of hāora.

Another example is Hydrogen or Hauwai. It has whakapapa to Tāwhirimatea and Tangaroa. They both fought over Hine-te-iwaiwa, as they both desired her. When they fought it was heated, violent, and they were angry. Much like the characteristics of the element hydrogen which is known to be violent and explosive.

I also created some infographics to show which foods are rich in certain minerals and I categorised them by the realm of atua they fall under. I included the function of each mineral in our body, the recommended daily intake (RDI) of the minerals as well as the amount of mineral found in each food to give a better idea of how much one must eat to meet the requirements. The RDI amounts are difficult to comprehend because the amounts needed daily can be as small as a microgram. That is why I included how much of a mineral can be found in food so that it is easier to quantify.

We had the opportunity to get out of the office on a few occasions. In our second week, we had a whakawhanaungatanga day, where we went on a hikoi to a local wairere in Huia to learn about the mauri of wai. It was a time to be out in the taiao, move our bodies, and swim in the refreshing water.  In the new year, we went on a haerenga to Rotorua. We spent the day in the taiao, following the path of the wai from its beginning at Rotoiti, to Okere falls, through the Kaituna river, all the way to where it meets the sea at Maketu. With each stop, providing a different food resource. There were koura in Rotoiti, eels in the falls and river, and fish and shellfish by the moana at Maketu. The kete mātauranga was full by the end of the trip, with kōrero of the history of the area, learnings of how to gather food from the taiao and how we can practice kaitiakitanga in our kainga.

Overall, I thoroughly enjoyed my time as an intern with Toi Tangata.  The learnings I’ve gained through this experience have further ignited my passion to continue applying mātauranga Māori in the different facets of life, including any future work I do. 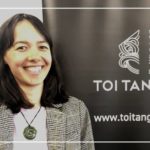 Wanakia Heather-Kingi has completed a Bachelor of Nutrition at the University of Auckland. She was a member of Toi Tangata’s Growing The Puna Internship programme for 2020-2021.

This author does not have any more posts.