Posted at 20:55h in News by admin-toitangata

As reported by One News, TVNZ 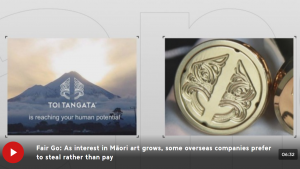 The Māori health agency Toi Tangata is calling on a British vaping product manufacturer to remove a vaping kit that uses the same logo as Toi Tangata, accusing the firm of blatant infringement of copyright and appropriation of Māori culture.

Toi Tangata says it develops, delivers, and champions kaupapa Māori-based approaches to hauora (wellbeing) so the use of the logo directly and deliberately disrespects its vision and values.

“The idea that people would use not only our branding but our culture to try and encourage to use their product is highly disturbing,” Toi Tangata CEO, Megan Tunks said in a statement today.

“Commodifying Māori culture through the use of the term ‘haka’ as well as through the imagery is highly offensive. We do not want Māori to be exploited when they have chosen to vape to quit smoking,” she said.

AMC was then contacted to remove the brand mark because of intellectual property breaches, which they declined, instead claiming ownership of the design and rights through heritage.

Toi Tangata says it acknowledges the whakapapa Māori (Māori genealogy) of the company creator, Acapella Harrison, but urge him to think twice about “commodifying Māori culture for profit”.

“We call for AMC Ltd to voluntarily remove the product which is offensive to our organisation and to Māori in general and urge them not to produce any further products that have Māori tohu,” Ms Tunks said.

Acapella Harrison told Fair Go he has not done anything wrong “and therefore I would fight until the very end to make sure that that’s well known”.

Mr Harrison said he did see the design on the internet but he didn’t copy it.

“I got it from every other influence that I found on the internet. Drew it by free hand first of all and then it was put over to a computer. And I’m not interested in a dispute,” he said.

Mr Harrison then threatened that if this went on the news, he’d come after Fair Go.

“If it is blown up larger than what it ever should be, then I am a tenacious person being half Māori. When we get our mind set on something then I will have to follow it through,” he said.

Toi Tangata’s lawyers are looking into AMC’s use of the agency’s logo.

Mr Harrison said once he has sold out of the disputed product, he’s going to relaunch with a new design.