Though the sport was formalised in the 1970s, you’d be forgiven for never having heard of disc golf before and though it’s hard to know the level of interest, the sport continues to grow in popularity. Disc golf is played much like traditional golf but instead of a ball and clubs, players use a flying disc. The aim of the game is also the same as regular golf- to complete a course in the lowest number of attempts.

Using rules similar to those in golf, players complete a hole by throwing a disc from a tee area toward a target, throwing again from the landing position of the disc until the target is reached. The trees, shrubs, and terrain located in and around the fairways provide challenging obstacles for the golfer. The sport shares the same joys and frustrations of traditional golf, whether it’s sinking a long putt or hitting a tree halfway down the fairway.

Like golf, it is often played on a course of 9 or 18 holes but there are few differences. Disc golf rarely requires a greens fee, you won’t need to rent a cart and you never get stuck with a bad “tee time.” It is designed to be enjoyed by people of all ages, male and female, regardless of economic status.

In short- anyone can! Disc golf can be played from school age to old age, making it the one of the greatest lifetime fitness sports available. Specially-abled and disabled participate, giving them the opportunity to take part in a mainstream activity. Because disc golf is so easy to learn, no one is excluded; players simply match their pace to their capabilities.

Where can I play?

One of the great features disc golf shares with traditional golf is that they are both played in beautiful settings. Disc golf courses can coexist with existing park facilities and activity areas. The ideal location combines wooded and open terrains, and a variety of topographical change.

The need for more courses is constant and the struggle to get permanent courses in New Zealand’s main cities and towns is ongoing, but some town and city parks have golf courses already set up. The great thing about these is they are all free to play as often as you like. Disc golfers who do not have the benefit of a permanent disc golf facility in their area often make up object courses in nearby parks and green spaces.

Disc golf offers year-round fitness, even in rain or snow. Perhaps the greatest attribute of the sport is the expense – or rather, the lack of it. A professional quality disc costs less than $30, and it only takes one for basic play. And, of course, there’s the sheer fun of the game – no matter what your age or skill level! So next time you’re looking for something new to try with the whanau, take a look and see if there’s a disc golf course nearby and get amongst it! 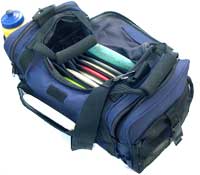