Posted at 21:36h in Atua Matua, News by admin-toitangata 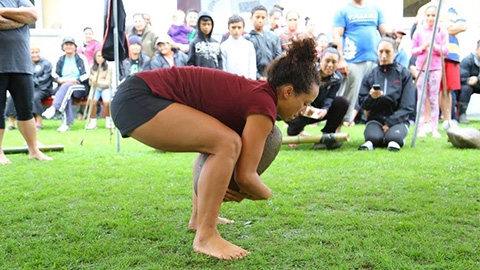 Every year during the Heiva Tu’aro Ma’ohi Festival, around 80 French Polynesian islands converge at Papeete to compete, dance and paddle in a variety of activities. Amongst these festivities is Tu’aro Ma’ohi, the Tahitian Islands’ equivalent of Tākaro Māori. The formal competition of Tu’aro Ma’ohi has been around for the past 132 years, but in recent times there has been a resurgence to return to ancestral games. Paora Te Hurihanganui, CEO of Te Papa Tākaro o Te Arawa, is well aware of this and is deeply involved in the kaupapa, having taken up the role of managing a team of athletes from Aotearoa who are to travel to Tahiti and compete in this event in mid-July.

“Over the past 12 years, Te Papa Tākaro o Te Arawa has worked with many indigenous sources (organisations and individuals) to learn, compare and to make sense of the way that games, activities and exercise contributes to Māori and Te Arawa health.”

A national qualifier was held by Te Papa Tākaro o Te Arawa earlier this year in order to select the team who will be competing in events such as Maiho’a Ra’au (fruit bearers race), Amora’a O’fai (rock lift) and Lancer De Javelots (spear throw). The athletes have been training hard for the physical and mental demands of the event and have been meeting in wānanga to prepare for the cultural aspects of the festival.

“There is a lot of work involved in preparing for such a trip and it takes around $30,000 to get a team of ten to these games. Funding, sponsors, athlete management and training are required to represent at Pacific level as well as having well established relationships with the Tahitian organisers.”

This will be the second year a team from Aotearoa will attend Tu’aro Ma’ohi after an invitation was sent out to the historical genealogical connectors of the Polynesian triangle, including Hawaii in the north, Rapanui in the east and the Cook Islands and Aotearoa in 2015 as a call to send competitors. It was a call Paora couldn’t turn down.

“Games, and in particular ancestral games, are doorways to opening opportunities to discover authentic prosperity and realisation of collective and individual life fitness.”

“Ancestral thinking suggests that winning and health are incidental outcomes from being exposed to and engaging in ancestral whakapapa, mātauranga- as well as such high level whanaungatanga in extreme conditions. Many ancestral games are developmental, experiential and grow the participants’ ability to handle the world at large within strength based physical and mental exertion. In the past the games were born from lifesaving exploits, tribal development and collective pride, growth through extreme challenges and the necessity of providing for your iwi.”

Toi Tangata team member Hariata will be joining the travelling team to compete in both the Maoho’a Ra’au (fruit bearers race) and Amora’a O’fai (rock lift). We wish the team well on their travels.