Posted at 01:37h in News by admin-toitangata 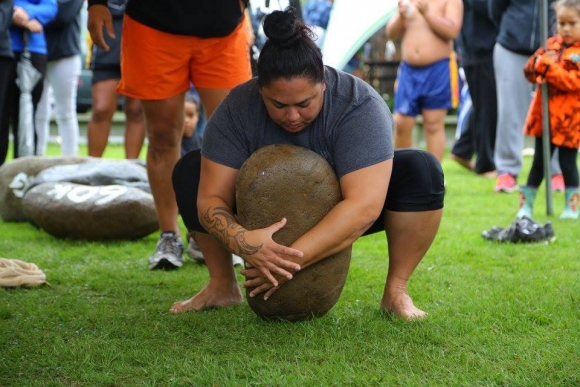 The annual Te Arawa Games were recently held in March and saw generations of whanau compete over three days for the overall winner’s title. Close to 1,500 people went head to head in a range of sporting events and activities as they represented their hapu and marae. An invitation to the ancestral part of Te Arawa Games was extended to the wider community so Toi Tangata gladly took up the challenge. Some of the team travelled down to Te Koutu marae in Rotorua to tautoko both the kaupapa and Toi Tangata kaimahi and games participants Matire and Hariata.

The pair competed in the open women’s Amora’a O’fai (or Amofai) event, a rock-lifting sport which originates in the French Polynesian Islands of Tahiti. It was traditionally used to determine the strongest competitor and has the potential to be very dangerous. Competitors started with a 30kg rock and worked up in 10kg increments. Hariata was knocked out early, yet still impressively, at the 50kg mark when she failed on the 60kg but Ma went on to be one of only three of the competing wahine who got up to the 60kg; not bad for her first time being introduced to the event and using the rock lifting techniques.

Hariata then also competed in the Maiho’a ra’au in the open women’s division, which involved a 1.3km run with a 15kg weight carried over the shoulder. She came first but was closely followed by Davina Thompson who completed the race traditionally- barefoot. Because of her success, Hariata was then asked to be a part of the team to compete in Tahiti.

The Toi Tangata team had a great time supporting the kaupapa of bringing those who have links with Tamatekapua together under the banner of sports and hope to see the event grow and succeed in the future.