Posted at 02:17h in News by admin-toitangata 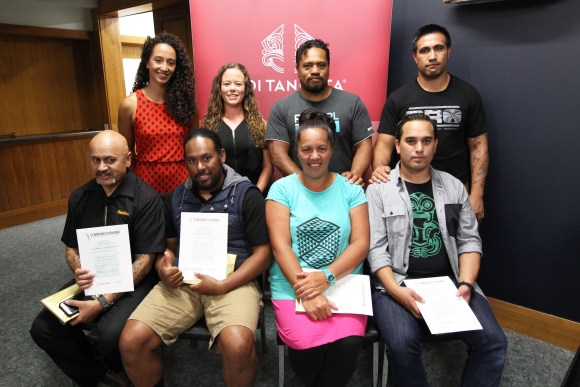 The graduation of the latest contingent of Toi Roa – Poupou Pakari students was celebrated at the Toi Tangata Hui-ā-Tau in February. This was an exciting affair as six of the twelve students were able to attend and accept their certificates in person. Among those present were representatives of the Te Puni Kōkiri funded initiative, Moving the Māori Nation. Within this initiative Pou Hākinakina are roles based in various rohe engaging with their whānau to be active.

We were also able to acknowledge two specific students with special awards. The first was the Whetū Maiangi, which draws on the interpretation of a faint hearted but strong willed star whose presence is felt. Moana Hoera who is based in his haukāinga working for Te Whakatōhea Māori Trust was the recipient of this award because of his contagious positive attitude and desire to learn, improve and strive for success. The second award was the Whetū Tārake which is appreciated as the brightest or most prominent star. This award was given to Canaan Tuhura of Te Arawa, Ngāti Porou, Te Aitanga-a-Mahaki and Ngāti Maniapoto who works for Te Papa Tākaro o Te Arawa. This student was a standout by far, he positively contributed to his whakapapa by demonstrating leadership and directly applied his knowledge into practice.

The Toi Roa – Poupou Pakari Tinana course was held over 16 weeks in late 2015. Delivered by Toi Tangata in collaboration with Te Wānanga o Raukawa (TWoR), it is a level 4 accredited course. Formally a certificate in Māori physical activity and nutrition delivered by TWoR, it took on a slightly different form this time around as the content covered was largely developed and presented by Toi Tangata.  With this unique opportunity Toi Tangata were able to experiment with a multi-medium learning approach to better cater to the needs of the students who were predominantly from the public health sector workforce. The mixed delivery approach included monthly wānanga in Auckland, weekly webinars, individually lead online learning, and a health tracking application.

Toi Tangata will be developing and offering other training opportunities over the course of the year.