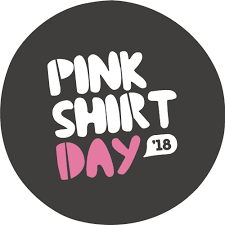 Pink Shirt Day is about working together to stop bullying by celebrating diversity and promoting positive social relationships.

It’s about creating a community where all people feel safe, valued and respected, regardless of age, sex, gender identity, sexual orientation, ability, or cultural background.

On Pink Shirt Day we ask New Zealanders to Speak up and Stand together to Stop bullying.

Celebrated annually around the globe, Pink Shirt Day began in Canada in 2007 when two students, David Shepherd and Travis Price, took a stand against homophobic bullying after a new year 10 student was harassed and threatened for wearing pink. David and Travis bought dozens of pink shirts and distributed them to their male classmates to wear the next day. The word got out online and hundreds of students showed up in pink, some from head-to-toe, to stand together against bullying.

We’ve been celebrating Pink Shirt Day in New Zealand since 2009 and the campaign grows stronger and larger every year.

What does Speak up. Stand together. Stop bullying mean?

Speak up
Giving voice to a problem is the first step towards addressing it. Having conversations with your friends, family, whānau, children, parents, teachers, students and wider communities is a great way to come up with ideas and strategies to address bullying. Speaking up is also about asking for help when you need it. This can be scary, and sometimes the first person you ask can’t or won’t do anything to help you. Keep asking. Pink Shirt Day shows there are many people who care about supporting you.

Stand together
Bullying behaviour is influenced by the actions and values of friends, families and whānau, schools, workplaces and whole communities. Real change happens when we stand together, sending a strong message that there is no place for bullying in New Zealand. Bullying often makes people feel alone, but Pink Shirt Day shows that many people care. Many people want to play their part in making New Zealand a safe, welcoming and respectful place for everyone, regardless of age, sex, gender identity, sexual orientation, ability, or cultural background.

Stop bullying
On Pink Shirt Day, look out on the sea of pink and know that together we can stop bullying. 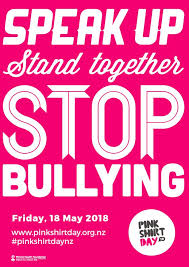